El Salvador, the smallest country in Central America, along with the roughly 6.5 million residents (and another 1.5 million abroad) have been in prolonged turmoil: Economic tumult, extreme violence, high poverty rates, political instability, corruption and natural disasters plague the small nation. Bitcoin has recently been instated as legal tender and as a potential solution to some of  the aforementioned issues. Furthermore, President Bukele also intends to harvest geothermal energy from Volcanoes to support the mining of bitcoin. - Author: JP Patheja Hellmich

El Salvador has been suffering from low levels of GDP growth with a current average of 2.3% annually - and a near 9% contraction in 2020 due to Covid1. As a result of the slow economy, 1.5 million Salvadorans emigrated to the US to work and send remittances back home to support their families. These remittances make up 20% of El Salvador’s GDP2!

In 2001, in an attempt to stimulate economic growth, El Salvador adopted the USD as their national currency. The rationale being a more accessible entry in the local economy for foreign investors and to stabilize inflation rates. This, however, came at the expense of losing control over monetary policy which was essentially handed over to the US Federal Reserve. Without control over money supply and interest rates, El Salvador now relies on taxes, local spending and foreign investments3.

The extreme violence in El Salvador, amongst other things, hindered foreign investments and growth; as 60,000 gang members are responsible for approximately 51 deaths per 100,000 inhabitants in 2019 (down over 50% from 108 deaths in 2015)4 - to boil it down, it is the world's most dangerous nation by homicide rate. This comes at a significant expense; of the USD 27 billion GDP (2019), violence is costing El Salvador 16% of its GDP5.

Part of this high crime rate can be attributed to the poverty rate. Although the poverty rate has declined from roughly 40% in 2007 to 30% in 20176, it still is extremely high. Another factor is the low level of education; the participation rate in secondary education is a mere 62%. Simultaneously, there is a growing rate of youths who neither study nor work (currently 25%)7 - Given these facts and figures, the aforementioned high crime rate should not come as a surprise.

Political instability and corruption further hinder progress. For instance, in the 1981 El Mozote massacre, nearly 1000 people (553 children) were raped, abused and killed; in 2020, when the courts tried to bring the responsible to justice, the military still concealed their identity and denied access to the documents detailing the event8. Additionally, it is known that the Police themselves are partially responsible for the high rate of disappearances, but only seldomly are these disappearances investigated.

Finally, to top it off, the country is ridden by natural disasters; it is prone to increased volcanic activity; a five-month rainy season that leads to floods and landslides; hurricanes and earthquakes9.

On the 7th of June 2021, Bukele’s administration successfully passed the world’s first law recognizing bitcoin as legal tender10. This means, every business will be required to accept bitcoin as payment. This includes the government, which will even be accepting tax payments in the form of bitcoin. Furthermore, any bitcoin transactions will be exempt from capital gains tax.

The idea is revolutionary and in theory, magnificent: the implementation of a decentralized currency, such as bitcoin, will aid El Salvador to be less reliant on the USD and hence independent of the monetary policy dictated by the US Federal Reserve. Given, that the FED has printed close to 30% of the current money supply since the pandemic onset alone12, it may be a good idea to create some distance. The decentralized nature also implies a reduction of corruption and interference by local authorities and individuals.

Furthermore, the transition to bitcoin would save a very significant amount of money from the annually transferred remittances (USD 6 billion), lost through the fees incurred by traditional banks and agencies13. Bitcoin would be simpler to use without all kinds of forms and restrictions; significantly faster as transfers are almost instantaneous; and as previously stated, vastly cheaper than the 10% (and higher) incurred through traditional monetary agencies.

Lastly, the shift to bitcoin is very likely to attract foreign investors and ultimately stimulate economic growth within the nation.

As promising as the move appears, some questions are left unanswered: Firstly, how will El Salvador (utilizing both USD and bitcoin), cope or deal with the immense fluctuations of bitcoin? Proponents of bitcoin don’t see this as an issue. They claim this volatility is not regarding bitcoin’s monetary policy but rather when measuring BTC in terms of USD and hence, inapplicable14.

A perhaps more significant question is how El Salvador expects to implement a digital currency when 70% of its nation does not yet even have a bank account. Although not a valid answer, proponents claim this is an excellent foundation for promoting financial inclusion15 in El Salvador.

Recently, bitcoin has come under much criticism for its adverse environmental impact. But even for that, President Bukele has seemingly found a solution - and to call it unconventional would be an understatement: Volcanoes will power bitcoin mining.

LaGeo, a local utility company, has been contracted to build a geothermal plant using the heat from one of the many active volcanoes in El Salvador. Supposedly, the energy is 100% renewable, completely clean and extremely cheap16.

This not only seems promising, but also plausible as a solution to cleanly and ethically mine bitcoin.

As we have seen, El Salvador faces many adversities. In response to the economic situation, President Bukele has become a first-mover in instating a cryptocurrency, specifically bitcoin, as legal tender in a nation. While there are open questions and concerns in regard to the implementation, the opportunities and solutions are manifold. Furthermore, it is truly disruptive and will render an interesting case study to observe, and perhaps even lay the foundation for more nations to adopt cryptocurrencies as legal tender.

It is abundantly clear that this disruptive technology is quickly gaining traction. Currently, the difficulty for most lies in navigating the unfamiliar terrain and grasping the concepts that underlie this technology. This is where we at 21Treasury are here to help you. Get in touch with us and we will be happy to tell you more!

Did you enjoy this article? Then share it on social networks or forward it to your colleagues. If you are an expert in the field and want to comment or endorse the article or some parts of it, please leave a private note via email to address it adequately. Thank you.

21Treasury offers comprehensive services for interested companies and investors to explore bitcoin, other digital assets, and even Blockchain and other Distributed Ledger Technologies (DLT). In times of increasing inflation due to quantitative easing and low or negative interest rates, companies are steadily realizing the need to rethink their treasury strategies in order to prevent their capital from debasing. Bitcoin and other digital assets have seen a massive influx of corporate and institutional capital which has been partly due to their store of value features. Thus, more and more companies are considering following this approach. Subsequently, this raises the need to understand this new digital asset class.

In addition to thorough explanations and advice regarding bitcoin and other digital assets, 21Treasury offers assistance in exploring Bitcoin investment vehicles and regulatory aspects that need to be considered when investing in bitcoin.

Do you wish to learn more? 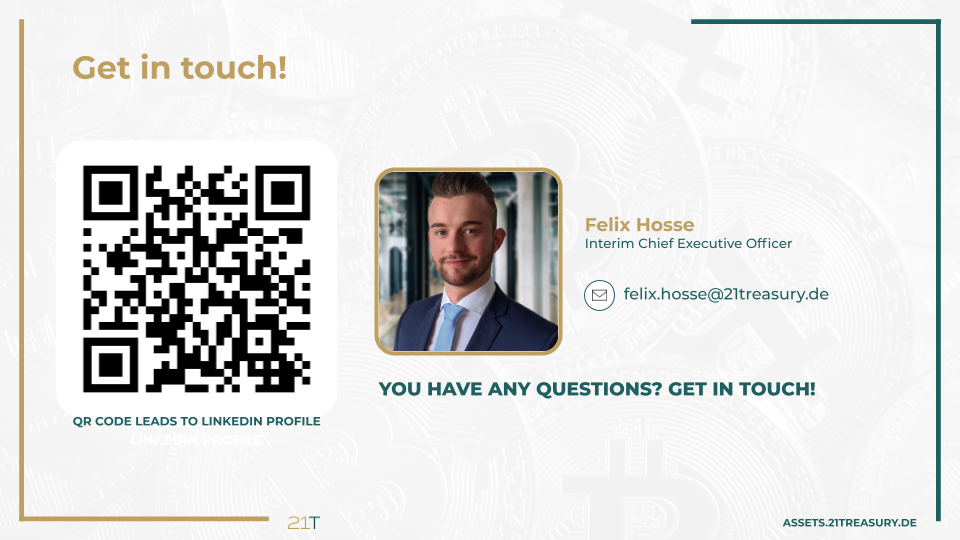 How can 21Treasury help you?

Schedule a call with us to discuss matters related to crypto-assets, which can be relevant to treasurers in the near future.

Inflation is here - could bitcoin be the solution?